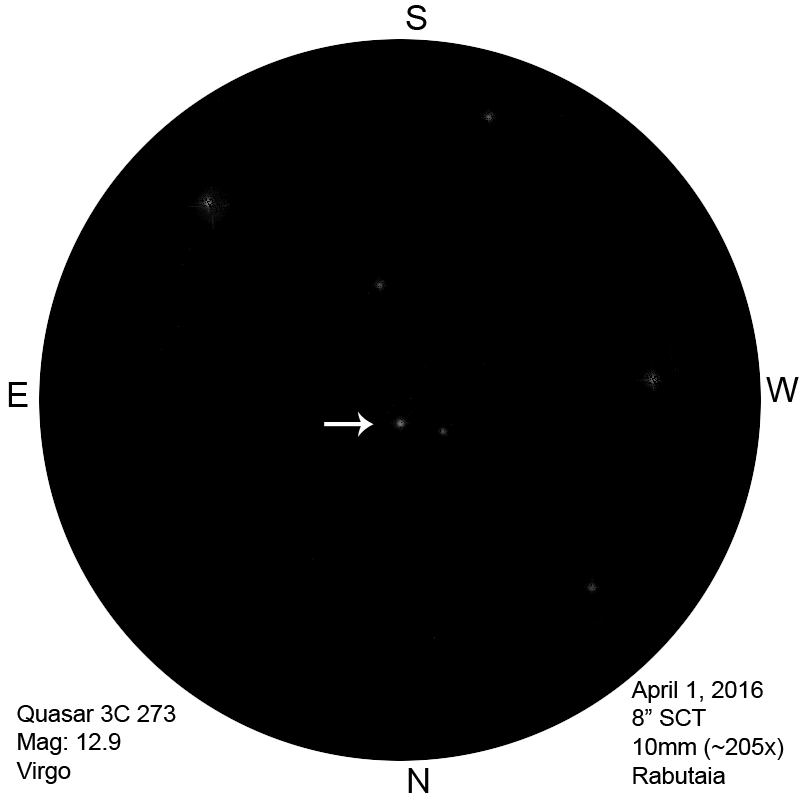 MOTIVATION: It had been almost 5 years since I first observed the awe-inspiring (also, ancient) object that this quasar is. So, this is the third time only, as I honestly have no memory of how difficult (or easy) it was to find it then, from exactly in the same backyard. This time it definitely was simpler than what I actually arecall.

THE STEP-BY-STEP OBSERVATION: With the ever-lame 6x30 Celestron finder, I star-hopped from the Lambda Virginis pair, moving 3°24' north-by-northwest to 5.7-mag. FW Virginis, then already with a 32mm EP on the diagonal, I moved to the plough-like asterism whose brightest star is 12-magnitude HD 109521, then 25'W to the pair formed by HD 108978 and HD 108929 and finally SW to the right triangle whose east-southwestern vertex has the star BD +02 2547 as the brightest object and a 11.9-mag star at the southwest vertex, and a 12.6-mag. star for the northwest corner.

Already with a 10mm orthoscopic EP, (though a FL not very often used by me, it undeniably darkened the sky) I trace an imaginary straight line back to BD +02 2547, and could se a "loose pair" (as described it Craig Cortis on his may 2010 article on heskyscrapers.org) - 3C 273 is the brighetst (bluish?) of said pair.

Software used: Android's SkySafari Plus (only for this cases I miss the more complete SF pro version I had on my old iPhone.) so I had to complement that with said excellent Craig Cortis's article whose description made me to be certain what I was looking at.

Clicking on the sketch's image brings out an animated GIF with the stars' apparent magnitudes - which, by the way, was copied from my lame original one done by the scope, via a snapshot of the very same area on Google Sky; then Photoshoped to eliminate the field stars not actually visible with my instrument. I also used both Skysafari and skymaponline.net to name/magnitude-tag the other stars.

The referred article is on:
http://www.theskyscrapers.org/can-you-find-a-quasar 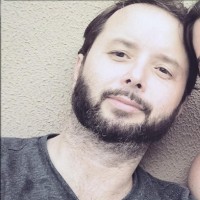 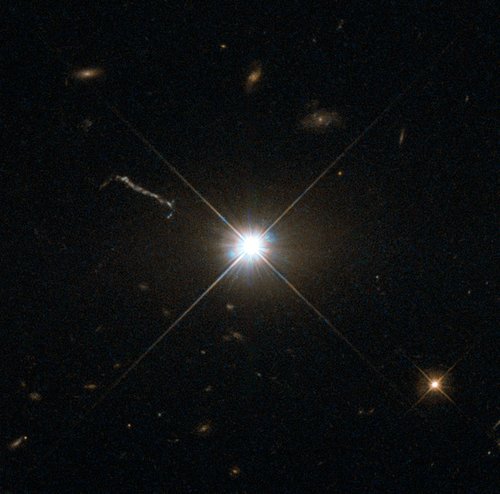